This page is for the 2013 remake. For the original 2009 game, see Armored Hunter Gunhound.

A remake of Armored Hunter Gunhound that was previously released only in Japan in 2013 for the PlayStation Portable and was formally a free update for owners of the original 2009 PC game prior to the developer's temporary suspension.
The game has occasional visual and audio issues along with some game-breaking bugs, and does not feature the ability to remap keys.[1][2]
Its exclusive fullscreen mode can cause the game screen go black, especially when played under Windows 10. See here for potential fixes.
As of October 16, 2018, this game is no longer available for purchase from Playism and Steam due to temporary suspension of the DRACUE Co., Ltd.[3]

This game was removed from digital distribution services as of October 16, 2018.

In the Japanese version of the game, the Options menu is accessed by pressing ↵ Enter, whereas the overseas version has its Options menu in the title screen. 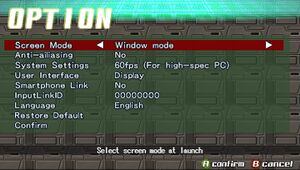 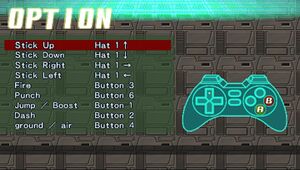 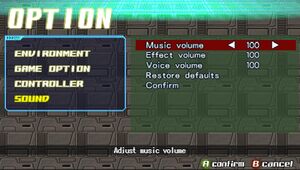 Audio settings in the overseas version.

This game's exclusive fullscreen function can cause the game screen to go black/gray that prevents the game from being playable, especially when played under Windows 10.

The overseas release of the game features a background image for exclusive fullscreen mode that is otherwise obscured by the game screen itself when upscaled with the pixel-perfect for stretched scaling.