Difference between revisions of "Warcraft III: Reign of Chaos"

The original version is no longer sold digitally as of November 2018 in favor of the remaster.
If a retail copy is already owned, access to the classic version of Warcraft III: Reforged (which allows access to the original Reign of Chaos and The Frozen Throne campaign content as well as Reforged multiplayer) can be gained for free by entering the serial key here on Battle.net and then downloading the installer from here.
With patch 1.21b, the game no longer requires the CD to play.
A free demo version is available from GameFront: Windows, OS X. While its missions were added in the full version of The Frozen Throne expansion, the voiceovers were not migrated.

Version 1.27b is the most up-to-date standalone installer version for the retail release, as well as the the Czech release.[citation needed].
Official support for Windows 7, 8.1, and 10 as well as Mac 10.10 and 10.11 was added with version 1.27a, though Mac 10.9 remains unsupported.
The 1.27b patches for a specific language can be downloaded from Blizzard's FTP server using the links below, or from the PCGW download mirrors (Windows, Mac).
Install the Reign of Chaos patch only if The Frozen Throne is not installed.

This requires the Battle.net App to be installed.
Versions above 1.28 will automatically update to Warcraft III: Reforged "classic" the next time the game is launched. Versions at or below 1.28 will automatically update the next time Battle.net is chosen from the main menu. "Reforged" visuals will only be available if the user's account has that version of the game purchased.
As of version 1.28, support for the Czech version of the game has been dropped,[citation needed] and new standalone patch installers are no longer provided by Blizzard. 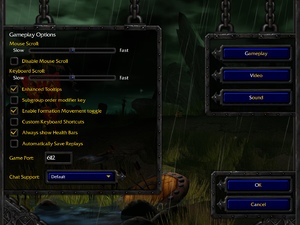 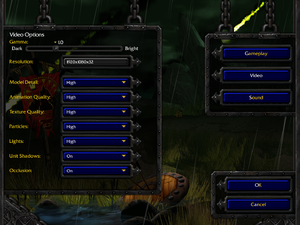 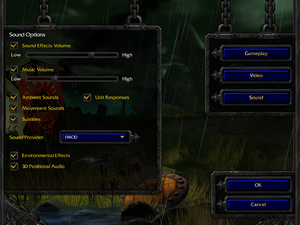 Windows NT is not supported

Only early builds of Reign of Chaos did not officially support the NT line of Windows operating systems.
The related warning when running the installer from pre-2007 discs can be ignored.

Official support for Windows 7, 8.1, and 10 was added in patch v1.27a.
It has not been confirmed if the following issue(s) are still present.

This may occur if the Reign of Chaos installer fails to deploy its uninstaller in C:\Windows, which is the case with the 2007 BestSeller Series re-release, which has an altered setup. The Frozen Throne checks for Reign of Chaos by querying the existence of the uninstaller file and will refuse to proceed until those files are present.

Blizzard's video codec does not get properly registered during installation on newer operating systems.

As of version 1.29.2, vsync seems to be active by default, also setting vsync=0 doesn't disable vsync, which probably implies the switch has been deprecated altogether.