From PCGamingWiki, the wiki about fixing PC games
Revision as of 09:31, 23 May 2022 by Aemony (talk | contribs) (→‎Support in games: removed a sentence since "fullscreen" nowadays means nothing)
(diff) ← Older revision | Latest revision (diff) | Newer revision → (diff) 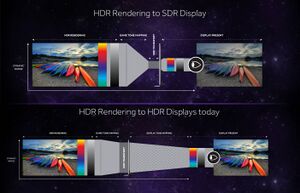 Games rendering in HDR do not necessarily output that image in HDR display compatible range. Due to technical limitations of SDR monitors of the 2000s when HDR rendering became more common, game developers had to map that vastly bigger dynamic range back onto what consumer displays commonly support. Since the introduction of HDR monitors in the second part of the 2010s, games do not have to perform that tone mapping any longer unless the operating system and/or monitor is running in SDR mode. However despite the availability of HDR monitors and inclusion of HDR output in modern versions of Windows, support for HDR output in newer games is still quite uncommon and the majority of games still prefer to map the HDR rendered image onto a standard dynamic range, even if HDR mode is enabled in the operating system.

For games that perform rendering in high dynamic range but do not natively support outputting it in HDR mode, it might be possible to force HDR output through alternative methods.

This refers to support in games for providing HDR output on an HDR display. It does not refer to HDR rendering. Games released before 2017 have no support for HDR output, unless it was patched in later or enabled through the use of a third-party mod.
Windows 10 v1703 ("Creators Update") or later as well as a HDR compatible graphics card, connection, and display are required in order to actually be able to show HDR content inside of only a window. Refer to the game-specific articles for details on how to enable HDR support.
Note that Windows 10 v1803 ("April Update") and later performs automatic brightness balancing of SDR content when HDR is enabled, which is not the same as if the game natively supported HDR output. To see if the brightness balancing feature is being used, play around with the Display settings > Windows HD colors > HDR/SDR brightness balance (called SDR content brightness in Windows 11) while the game is running in a window. If the brightness of the game changes then it outputs in SDR and does not support HDR output natively in window mode. However if the brightness does not change then the game properly outputs in HDR.

For Windows games lacking native HDR display support it is possible to approximate or retrofit HDR output to achieve a similar result. While some of the methods can technically be used for older APIs lacking HDR rendering support, the best results can be expected from APIs that natively support it (DirectX 9 or OpenGL and above).