The game has a "roar" meter which is meant to slowly refill when used. However this does not always work, which makes it impossible to complete level 2.

This appears to be related to the CPU speed, if the CPU is too fast. A workaround is to pause the game (press "P"), and then unpause. On occasion you may need to keep the game paused for 5–10 seconds.

This game has no save feature. 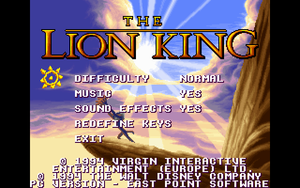 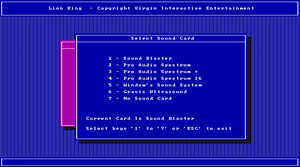 On level 2, Simba may fall down beside the ostrich instead of riding on its back. If this happens it is impossible to complete the level.[2][3] This issue is not fixed in the re-release on GOG.com and Steam.[4]