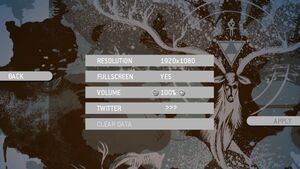 Using Alt+Tab ↹ appears to cause loaded tweets to fail.[7]

Appears to be treating all international keyboards as US keyboards.[7]

May or may not be related to ATI Cards but the game does not display background graphics or intro video.[8] The log lists various information, for example:

Some users have had success fixing this by disabling the Catalyst A.I. in the AMD Control Center.[9]

The game will sometimes freeze in the transition between areas and at the end of a section. ALT-tabbing out and back works between areas, but when stuck after the second level it can be stuck permanently.

The Steam version comes with the game's soundtrack in MP3 format (FLAC and others available here). It can be accessed by going to <path-to-game>\soundtrack.