Installer is 16-bit only. Use the Alternate installer for 64-bit versions of Windows.

A preconfigured WINE wrapper for Linux is available.

Gets the installer running on 64bit systems
Gets Direct3D mode working properly, without crashes, in high resolution and optionally super sampling antialiasing

The latest version is 2.0.1. Install the 1.1 Update, 2.0 Update, and 2.0.1 Update.
Use the Outlaws D3D Update to add Direct3D rendering and support for higher resolutions (requires the 1.1 Update).

Track list, as taken from the back of the CD case. Tracks 2-9 of disc 2 are renamed to tracks 9-15 in digital rereleases.

On the left, the Outlaws Registry; on the right, in-game general settings. 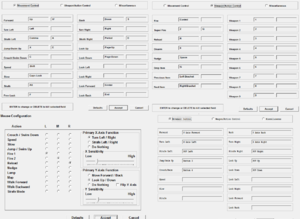 A collection of screenshots from in-game input options. 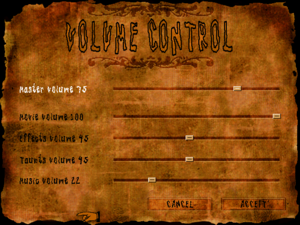 This happens only in native Direct3D mode.

Black screen or other issues with 3Dfx Glide[edit]

The version of nGlide (the Glide wrapper) that comes with Outlaws is outdated.

These features of the game require software rendering mode.

The Windows mouse pointer (or the blue, "working" circle) briefly flashes on screen while playing.

No music during gameplay[edit]

Using software rendering restores the game's original, full-sized HUD (with the gold bar along the bottom) and sepia effects.

Patched re-releases of the game allow software rendering only in windowed mode. The instructions below allow it in fullscreen.