Patch 1.1 is the latest patch available for the game and provides bug fixes.

All digital versions come with the patch pre-installed.

Moonbase Commander used to run off of GameSpy Arcade for Internet/LAN Play, but since the service has shut down, the game has been notoriously hard to configure to work through the LAN and Internet modes. The Moonbase Console rectifies many issues, including an easier matchmaking option for LAN/Internet games, as well as being able to make 100% custom maps not normally in the game. 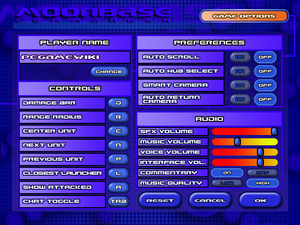