Leisure Suit Larry in the Land of the Lounge Lizards

This page is for the original game. For the 2013 HD remake, see Leisure Suit Larry in the Land of the Lounge Lizards: Reloaded.

Can be run under ScummVM.
Uses an anachronistic age verification quiz, which has to be solved at every launch. This feature is also present in all digital re-releases. See: Issues fixed.

The original 1987 EGA release employs AGI engine and text parser interface. The game runs in 16 colors with PC speaker or Tandy sound.
The 1991 VGA remake employs SCI engine and icon-based point-and-click interface. The game has updated graphics and new soundtrack. It runs in 256 colors and supports multiple soundcards.
For the 2013 HD remake, see: Leisure Suit Larry in the Land of the Lounge Lizards: Reloaded.
The GOG.com and ZOOM Platform re-releases are a bundle based on the 1997 Leisure Suit Larry: Collection Series. They include:

This fix is for the ScummVM re-release of the EGA version. It will enable MIDI music in place of the default 3-voice Tandy sound. 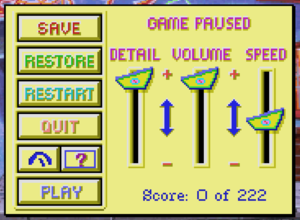 Due to its adult nature, the game uses a period-correct trivia quiz to verify the user's age. These questions have to be answered every time the game is launched.