This page is for the remaster. For the 1998 original game, see Forsaken.

Forsaken Remastered is a singleplayer and multiplayer first-person action, FPS, shooter and vehicle combat game in the Forsaken series.

Contains every level from the PC and N64 versions of Forsaken as well as levels exclusive to this version.

Soundtrack can be found in Ogg Vorbis format at <path-to-game>\music\OGG. 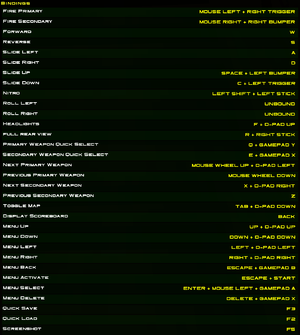 This error occurs, only with OpenGL, when SDL2 wayland command is not used and/or attempting to run in fullscreen.

If fullscreen is enabled and you cannot start the game (encounter error message), open the kexengine.cfg and adjust as seen below:

Various Python scripts for Blender that were used for developing the remaster.
Were designed for personal use; as such, some features are not completely functional.

Intel CPUs rendering graphics may not be OpenGL 3.2+ compatible.