Port of the Xbox version. PC version does not include the graphical improvements from the Xbox 360 nor Wii release.
The Steam version doesn't support Intel integrated graphics, only AMD or NVIDIA GPUs. Playing with Intel graphics crashes the game; see Game crashes when starting Story Mode for fixes.

A demo is available, containing the first race of Story Mode.[Note 1]

These issues are known to occur on the Steam version of the game.

There are harmless visual issues, such as menu icons being in the wrong layer order, and numerous instances of Z-fighting, including Mack's eyelids and DJ's stereo system. This also occurs on the Xbox version. 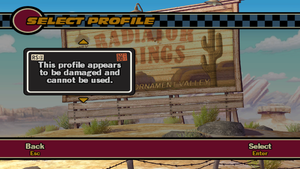 Some Users has been reporting that their profile keeps getting corrupted, or crashes when trying to load the profile after relaunching the game again. The reason of causing it is unknown and as of yet there are no main solutions for it.

This is a bug that occurs when playing the game with Intel graphics cards because they aren't supported by the Steam version.

This is a cross-platform bug where doing tractor tipping causes an unfixable bug. This bug disables camera auto-centre even if the option for it in the settings is on, and the save file is permanently stuck with that bug.