The European release of the Hitman Collection is DRM-free, already patched to the latest version and have the cheats enabled by default.

Patch v1.74 is the latest retail patch.
Digital distribution versions are v1.75 only in Steam and comes with other languages support and widescreen support.

Maximum of 99 save files.
Save states contain system information. Loading a mid-mission save file from a different computer or operating system may result in severe broken game timing. 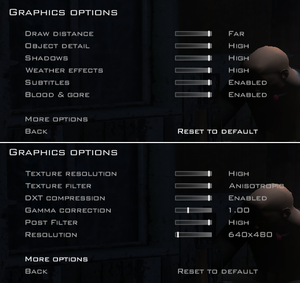 Whenever the player dies, the screen goes all white and stays that way

Vsync (Enable by default) not working on Windows10

The Hitman: Contracts Original Soundtrack was composed by Jesper Kyd and released in 2004. It is arguably darker in composition when compared to Jesper Kyd's scores of previous or subsequent Hitman games. The score features the same Latin choral arrangements as in all the other scores; however, they are heavily sampled and mixed into the dark electronic soundscape.[9]