This page is for the 2003 shooter game. For the web browser, see List of games available on Chrome Web Store.

The game was re-released in 2004 as Advanced Battlegrounds: The Future of Combat (known in Europe as Chrome: Gold Edition).[1]
The game includes a level editor, detailed editor tutorial and Java source code that can be recompiled to change the game logic and settings.
Unofficial Patch is available which provides easy ways to adjust for widescreen, FOV etc.
Limit frame rate or apply VSync on fast systems.

A demo can be downloaded from here or here.

You should limit the FPS to 60, otherwise problems can arise, like "slippery / sliding" movement.[6][7][8] Use a tool like Rivatuner Statistics Server or your GPU tool for that and apply a 60 FPS limit on ChromeSingle.exe. Alternatively, force VSync if it leads to the same outcome for your monitor.

Each save uses multiple files.
4 quicksaves and 10 manual saves. 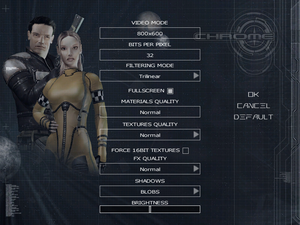 The below workarounds for widescreen and FOV are unnecessary when using the Unofficial Patch which already incorporates these options. 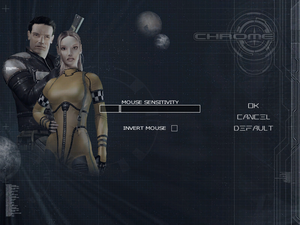 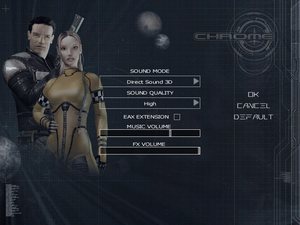 Can no longer shoot or jump[edit]

On a system that runs both an integrated Intel GPU and a dedicated GPU (with a system like MSHybrid / Nvidia Optimus), the game might steadfastly refuse to recognize the dedicated GPU, even when set in the GPU control center.