Call of Cthulhu: Dark Corners of the Earth

The GOG.com version includes various small fixes, including: proper Vsync functionality, a fix for the triangle raindrops on AMD cards, and a custom-made fix provided by user Guzz, which allows the invisible sorcerers on the reef to appear properly, plus restores skybox rendering.[2]

If you own both this game AND the 2018 CoC game on Steam, be aware they both try to install to the same directory, by default 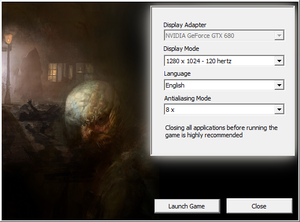 Fixed in the GOG.com version.[2]

When you first get to use the cannon, you need to hit three targets shown as a blue light. If playing on Windows Vista or later, these targets are not visible.
Fixed in the GOG.com version.[2]

In the GOG.com version, fullscreen mode defaults to 60 Hz, even if the screen refresh rate is set higher than that.

All of the issues below can be solved by capping the frame rate at 60 FPS. However, this only works for some users.[citation needed]

When descending into the basement during the prologue, the game may crash if you don't get down fast enough. The crash can be avoided if you jump off of the ladder without touching the stairs. Be advised that this may take a few tries.

Room with the hung woman glitch[edit]

In the old newspaper office, during A Visit to Old Town near the beginning of the game, there are two doors on your way out, if you take the right door you will enter a room with a woman who has hung herself. This room can sometimes glitch and will cause you to lose mobility of Jack and be unable to progress. Just skip that room as there is nothing of interest otherwise in it, take the locked door on the left, by unbolting it in the upper corner of the door.

In chapter 3 (Attack of the fishmen) you will sneak through a warehouse. After crawling under the floor you will climb into an office. When you try to get to the save symbol by pushing the bookshelf the game crashes.

Changes various aspects of the gameplay and adds support for cheats.

Simulates HDR and bloom lighting, as well as advanced contrast for a more natural and realistic atmosphere.
In-game MSAA must be disabled in order to work. Force it through graphics card control panel.