Also known as America: No Peace Beyond the Line and A*M*E*R*I*C*A.

1.02 is the latest version. It fixes random crashes that may occur on 1.00 but also comes with new problems. See Resolution troubles. 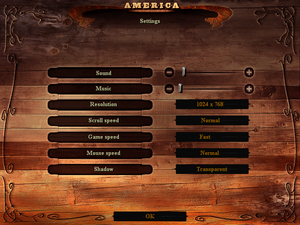 Crash upon saving in mission 5 of the Mexican campaign[edit]

There is a bug in mission 5 of the Mexican campaign that might prevent the player from saving their game in this mission since the game will suddenly start crashing upon each saving attempt and the created save file will be corrupted. This problem can reliably be reproduced on said mission on patch 1.02. The only known way around it is to win the mission without relying on saves.

Sometimes the pathfinding of all units on the map can become extremely slow or cause units to ignore orders and remain frozen. This is usually caused by the buggy AI trying to move their army to a spot they cannot reach or a destination very far away. Usually a big group of enemy troops can be found stuck together somewhere. Killing them typically restores the regular pathfinding behaviour.