The Steam version (v1.02) is slightly censored (removed certain lines of dialog, alcohol references, and minor changes to certain disguises)[1]
The European release of the Hitman Collection is DRM-free, already patched to the latest version and have the cheats enable by default.

The GOG.com version is patched to work better on modern operating systems and it's the uncensored version 1.01.

Patch v1.01 is the latest patch available. English, French, and German versions of the patch are available.

Maximum of 99 save files.
Save states contain system information. Loading a mid-mission save file from a different computer or operating system may result in severe broken game timing. 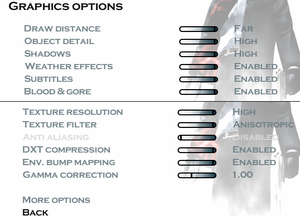 Some widescreen methods are reported to cause crashes at least on the Kirov Park Meeting level.[4][5]

May require DirectSound3D restoration software to restore proper sound functionality on Windows Vista and later. An AM3D "DieselPower" audio engine for the game is available here.

Game shows a gray or black screen on Windows 10

The window is displayed in the middle of Windows workspace, which may end up being in-between screens.

Black screen during the cutscenes

Frame rates above 60 fps will cause NPCs to be more sensitive than intended and may affect pathing timing. Game is still playable at 144 fps, but issues may arise if attempting to play through a level with perfect stealth.
Very high frame rates will cause a "slow motion" effect in-game. Extremely high frame rate (above 1024 FPS) will freeze character movement and break in-game cutscenes, which can make it impossible to load the opening level.[8]

Vsync (Enable by default) not working on Windows10

The soundtrack was composed by Jesper Kyd, with the tracks "47 Makes a Decision", "The Setup", and "End Boss" being additionally composed by Pierre Földes. The score is orchestral and choral based, and was being performed by the Budapest Symphony Orchestra and Choir (with around 110 musicians) which was then mixed and edited in Denmark at major Copenhagen studio RadioHusets Concert Hall.[9]