Wizardry: Bane of the Cosmic Forge

Otherwise known as Wizardry VI
Characters cannot be imported from earlier games, unlike most games in the series.

Supported by Grid Cartographer. Its Game Link feature assists in creating the game map. This is not an automap. From the Grid Cartographer's documentation. (note: this is not free software! the 'gamer' edition costs $19,99 and the 'professional' costs $49,99)

The carrying capacity of your characters is set at game start, and does not change with increases in strength or class changes, as it does in Wizardry VII.[6] If you want a fix for this, Mike Marcelais has made one available.

The Level 7 Spell Bug will haphazardly render monsters immune to the four level 7 spells which damage all monsters: Nuclear Blast, Word of Death, Mind Flay, and Deadly Air.[7] A patch for this bug may be downloaded here. 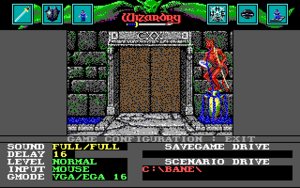 No keyboard input indicator in menus[edit]

The keyboard input indicator is not shown when in mouse mode; these steps switch to keyboard mode, allowing the indicator to be displayed.
Full keyboard input is also useful if you are wanting to play with a controller (use the DOSBox Mapper to change key assignments).

Additional libsound1.2 and libnet1.2 packages may be required on Linux.