Carmen Sandiego's Great Chase Through Time is a 1997 point and select educational adventure game in the Carmen Sandiego series developed by Brøderbund. A more traditional game in the genre compared to past franchise entries, the player, an ACME Agent, must travel through time to capture Carmen Sandiego and her V.I.L.E. henchmen before they permanently alter the course of history. The game itself is partially based on the PBS game show Where in Time Is Carmen Sandiego? and features its theme song.

This game was originally released in 1997 as Where in Time is Carmen Sandiego? and is titled as such in-game. It was rebranded by The Learning Company in 1999 as Carmen Sandiego's Great Chase Through Time.

There are issues when attempting to install the game under a 64-bit operating system (see Installing on a 64-bit OS). Even then, the game has issues running under a modern OS (see Issues unresolved).

Game manual (as Where in Time is Carmen Sandiego?)

Save game file is mostly encrypted; the only parts of the file that are not encrypted are player names. 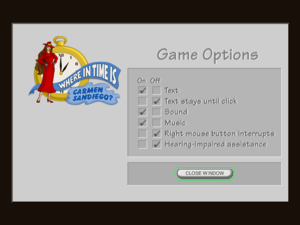 An issue when running the game on a modern OS is that scenes in the game show up in black except in areas where some sprite suddenly shows up or moves over the black area, such as a character, subtitles, the cursor, or the Chronopedia. Using Windows Compatibility Mode settings does not fix the problem.

Installing on a 64-bit OS[edit]

Recommended only if you do not have access to a virtual machine with an older OS (see Issues unresolved).

When attempting to install the game on a modern 64-bit OS, the SETUP.EXE Autorun from the CD's base folder does not work, as it is a 16-bit program.

Case 16 has a music sheet-reordering puzzle that requires players to listen to parts of the openings to Ludwig van Beethoven's Fifth and Sixth symphonies, which can be difficult for players with hearing problems like that of the composer himself.
Enabling "Hearing-impaired assistance" in the game options will change the descriptions of the different-colored sheets from their colors (written as "[Color] Score", e.g. "Blue Score") to their correct ordered positions (written as "[Ordinal Numeral] Sheet", e.g. "First Sheet"), allowing deaf or hard-of-hearing players to complete the case.