Aliens: A Comic Book Adventure is a point and click adventure game loosely based on Aliens comic book series. It was developed by French studio Cryo Interactive and published Mindscape. In the game player takes on the role of Lt. Col. Henry Hericksen an ex-Colonial Marine aboard the USS Sheridan who is now the commander of a three-man terraforming team.

The game was released for MS-DOS and Windows 95 (still utilising DOS) on May 25, 1995 generally mixed reviews.

The game currently remains unavailable for purchase with only rare second hand copies of original game being available. It is however playable on modern operating systems by using DOSBox, although increasing the amount of reserved RAM is recommended to increase the time after which the game crashes.

This game is not available in digital distribution.

Depending on a language 2 patches are available:

They can be downloaded here (or Patches Scrolls).

Note that when using DOSBox these locations are moved to a root of disk mount point. 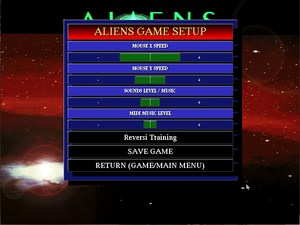 Game crashes after a while[edit]

Following command-line parameters have to be used with ALIENSP2.EXE available for patched version of the game.