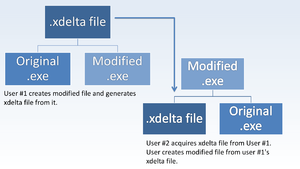 Xdelta is a utility which is used to generate a file of differences between two binary files. This effectively means only modifications made between the two binary files are saved; the resulting file is easily shared to another user, who can use it to generate a modified file from the original file. This is especially useful if the original file contains copyrighted material (e.g. game executable, rom) or the original file's filesize is huge. While the examples in this article use regular Windows executables (.exe), Xdelta can be used with any kind of binary file.

For more options, use xdelta -h.

Includes basic patch applying and creation.
Really small filesize makes it easy to bundle with Xdelta patches.
Included Xdelta may be outdated. Simply download binary from official site and replace supplied executable with updated one and rename it the same.

Still under construction. Initial Windows patch file made for Batman Arkham Asylum, in to do list to modify windows batch file to contain more variables making it easier to use across multiple titles and creation linux bash file.