The CD version released in 1999 was updated as recently as 2020.[1] New updates are still actively developed by volunteer maintainers, then approved and published by Team17.[2][3]

The GOG.com and Steam versions come with the latest updates previously released for the CD version. New updates are released for the Steam, GOG and CD versions in sync.
Sold Out version uses custom Setup.now.exe launcher from publisher and was bundled with Worms 2.[4]

Patch v3.0 for the European release synchronizes the game to the later American version and fixes multiple bugs. It is available at ftp.team17.com, www.moddb.com and at soggi.org.

The latest update is v3.8.1 (formerly at the official website and the Team17 FTP). It is a result of Team17's permission given to two community members, Deadcode and CyberShadow, to update and patch the game. Other than fixing a multitude of bugs and adding some new features, the game is now more compatible with newer systems. These patches are not compatible with some versions of the game, however (downloaded versions, such as TryMedia). 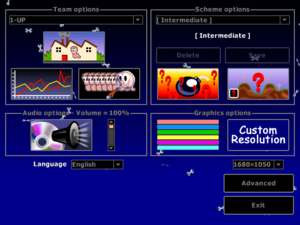 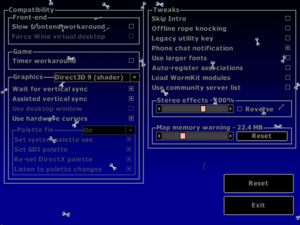 The in-game settings menu is rendered in 640×480 resolution but the game itself is rendered at selected resolution. That however can be fixed with the "SuperFrontendHD" Wormkit module.