The game is set to receive two major free updates post-launch which will include new cars and stages.[2]

The Deluxe edition includes the base game, the Mitsubishi Lancer Evo V, the Arena Panzerplatte stage and the Career Starter Pack.[3] 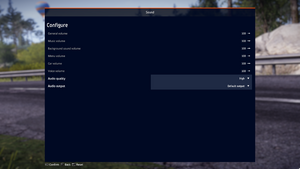 Thrustmaster wheels may not be configurable.[7][8]

Stuttering may be alleviated by unplugging some USB devices[17] or mitigated by turning on Vsync and limiting the framerate.[18][19][20]
Stuttering may also be caused by Gsync/Freesync/VRR. The engine isn't compatible. The fix is capping the frame rate to 60 and enabling vsync or vsync fast(nVidia) as well as disabling Gsync/Freesync/VRR completely. This works in WRC 8,9 & 10 and other games using this engine.