The Ultima Underworld 1 Patch is needed for floppy disk versions. The CD-ROM and GOG.com versions are already fully patched. An unofficial General MIDI patch is available here as well.

The biggest change is the addition of mouse-look (looking around by moving the mouse), which can be toggled on and off with a keypress. In support of this, the allowed range of vertical view angle has been greatly expanded, and the 3D rendering engine has been hacked to have it draw the bits of the world that become visible when the player looks sharply upward or downward.

Also, spell runes can be typed directly (with Ctrl+Alt+<letter>), without having to navigate through the inventory and the rune bag.

A number of keys have been added or changed as listed on the patch website.

Use Underworld Exporter to play in higher resolutions, add mouse look, listen to higher quality/custom music, etc.
Some bugs still remain.
Can also be used to play Ultima Underworld II: Labyrinth of Worlds, but it is only partially supported at the moment.

The SAVE1, SAVE2, SAVE3 and SAVE4 folders are save slots I-IV. SAVE0 is temporary storage, not a save.
In-game settings are stored in each save rather than shared. 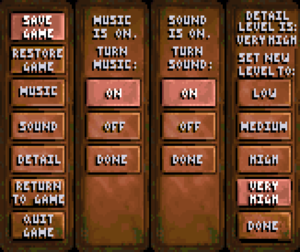 An alternate shades.dat is available here which will increase the overall brightness of the game without destroying it's atmosphere. Use it if you feel the game is too dark.

Chinese, Korean and Polish retail versions only have the manuals translated; the game itself is still in English.

The GOG.com version's sound is incorrectly configured by default to use the Roland MT-32. As the Roland MT-32 predated General MIDI, the sound effects will not match with what's normally expected.[5]

The cursor may jump around in-game or mouse control may feel sluggish (especially on menu screens). To fix the first issue, disable joystick functionality; to fix the second, increase mouse sensitivity.