This page is for the original 2006 version. For the enhanced 2016 version, see Titan Quest Anniversary Edition.

Titan Quest is a singleplayer and multiplayer bird's-eye view ARPG game in the Titan Quest series.

The Gold Edition includes the base game and the Immortal Throne expansion.
The Anniversary Edition has a working multiplayer and is free to anyone who registers a Steam copy of Titan Quest.

The latest official patch for the base game is 1.30r2, available here.
The Immortal Throne expansion did not receive official patches.

Download mirror
Already included with some mods, strongly advised. It fixes many bugs and technical issues left in the game. Immortal Throne expansion is mandatory.
Do not save the patch in the original Titan Quest folder.

Can fix the RNG, slow casting and the socket error
A versatile program with built-in mods, intro skip option and a character editor (either to fix/restore broken characters or to cheat).

Mix and match Steam and non-Steam original and expansion[edit] 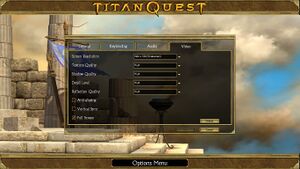 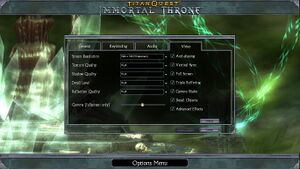 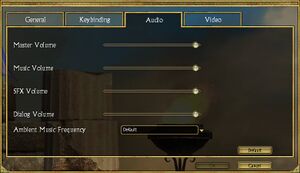 Players with the unofficial patch installed can connect only with others that also have it.

There may be an error with searching and joining multiplayer games online through Steam. The error message indicated a problem with .\common\gsPlatformSocket.c with Expression theSocket != INVALID_SOCKET.

Extensive mod that raises the level cap to 85 (from 75) and introduces new content as well as balance, making the game more difficult overall but close to its original style. 1.17a patch is embedded.

Acts as an external, independent, shared inventory. It can create unlimited Vaults, useful for creating collections of rare items or "twinking" (giving characters items found by other characters, generally from later parts of the game and higher quality). It also has some item-editing features, such as the ability to change a relic's completion bonus, clone items or complete sets. Users of the Steam version of Titan Quest cannot use this tool, as use will likely result in corruption of all characters edited by the program.