A detailed tweak guide for gameplay, graphics and other aspects is available.
Archived download for the rare DXtool needed at some point in guide

Includes "Thief 3 Gold", "The Minimalist Project" and "John P.'s texture pack" (all optional).
Adds native widescreen/multi-monitor support and fixes compatibility issues.
Gold mod removes most of the loading zones in the levels, expands maps and fixes bugs.
Minimalist Project aims to provide an experience more like Thief: The Dark Project and Thief II. Increases the difficulty of the game.

AI upscaled textures & cinematics for Thief: Deadly Shadows. Requires Sneaky Upgrade to play.
Not only all the textures upscaled but also modified MatLib (material library) file included to add or restore normal maps for all the materials lacking them.
Comes in two versions: 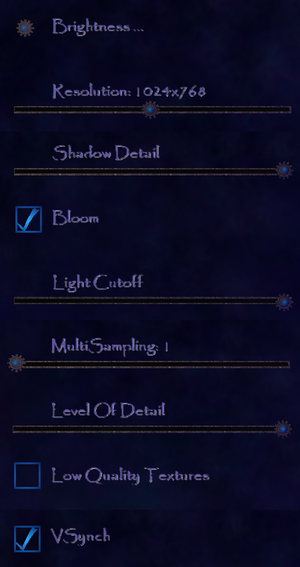 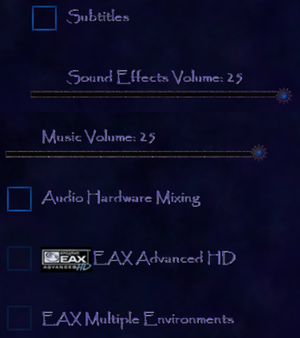 This problem occurs on multi-core systems and is fixed by the Sneaky Upgrade.

Garrett gets stuck when lock picking or using ladders[edit]

This is caused by high frame rates; enable Vsync and use a refresh rate no higher than 60 Hz.

Temporary switch to desktop or black screen when loading[edit]

Use MultiSampling and Bloom together[edit]

Deadly Shadows doesn't allow you to set both MultiSampling and Bloom in-game; enabling either will disable the other one.

If you enable Bloom in-game, the image became blurry because of the original shader code. This can be bypassed using ReShade.

Use the Ambient Occlusion flag 0x0000001E with Quality or High Quality.