The application was first released in 1996 on Windows and Macintosh. An updated version with new topics, The Walt Disney World Explorer – Second Edition, was released in 1998. Because of rapidly evolving technology and increased public access to the internet, as well as changes to the resort in the years since, no further editions were made and the application is no longer sold by Disney. The Second Edition adds a disclaimer in the credits and manual that reads, "Please note that because of continual improvements, some of the information contained in The Walt Disney World Explorer – Second Edition may not be current."

The Walt Disney World Explorer on Fandom's The Disney Wiki, featuring a list of topics in the application

This application is not available digitally.

The only save data that the application saves are found Hidden Mickeys and the high score for The Walt Disney World Quiz Challenge.

All fixes apply to both versions.

Both original and Second Edition disc releases use a 16-bit installer.

Installing the application messes with Windows Explorer on startup[edit]

After installing the application on a modern machine and going through the mandatory restart after setup, blank Explorer.exe errors with yellow warning signs appear on startup, and the machine always opens the File Explorer windows that were open when the application was being installed. This is due to the application adding a deprecated string value to the Windows Registry during the setup that was supposed to be deleted upon returning to Windows after the restart. 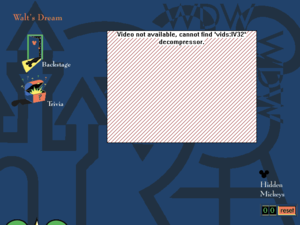 The error as seen in the application; the video that is playing but cannot be properly shown is the "Backstage" video for the "Walt's Dream" topic.

When playing AVI videos from within the application on a modern computer, the application will only play the audio and show a white box with red diagonal lines, a black border, and a message that says, "Video not available, cannot find 'vids:IV32' decompressor."

While the application runs well on modern machines, it can only play one audio file at a time when running natively on such. This means that sound effects from elements seen in the overworld maps and from clicking with Tinker Bell will not play; only the background music and the narration (which is supposed to play on top of the music, but instead interrupts it).
You can ignore this fix if you want to hear the overworld narration more clearly or if you find the sound effects distracting.

If you are using VMware Workstation, change the mouse optimization setting to "always." This should fix the issue.
Otherwise, install it on the native OS and follow any of the fixes above if you need to.

Information is taken from both the original release and the Second Edition.

Information is taken from the original release only.