The Secret of Monkey Island

This page is for the original Monkey Island. For the 2009 remaster, see The Secret of Monkey Island: Special Edition.

Special Edition includes a "classic mode" that closely resembles the original. The original game's data files can be extracted and used with ScummVM.
Can be run under ScummVM.

A demo can be downloaded here and played using DOSBox. It has different puzzles and dialogue compared to the full version.

Apart from the Demo version, there have been three DOS releases of this game with different video and audio options.

This version shipped on diskette, and offers support for

This version shipped on diskette, and offers support for

This version, shipped on CD-ROM, and offers support for

In addition the CD-ROM has 24 digital audio tracks sampled from a MT-32 for background music during the game.

It uses the updated game engine from Monkey Island 2, and uses icons for inventory instead of text.

The classic version can be played on modern systems using DOSBox or ScummVM.

If the game is running via ScummVM, this patch is irrelevant

A patch[1] is available to solve problems with Sound Blaster and 486 or faster computers for the VGA256 edition of the game. The patch is available simply as MONKEY.EXE, and replaces the MONKEY.EXE that came with the game.

A patch[2] was made available for adding Roland MT-32 support to the EGA diskette versions of the game that lacked the support. The patch is available as a self-extracting ZIP file named MONKEYUP.EXE that extracts to DISK09.LEC.

After the update, running MONKEY ? will not show a Roland option. Despite this, starting the game with MONKEY R will attempt to use the Roland MT-32.

Uses the 2009 "Special Edition" version to create a fan patched[3] version that adds bug fixes and speech. And unlike the Special Edition version, can be run from ScummVM, DOS or DOSBox. 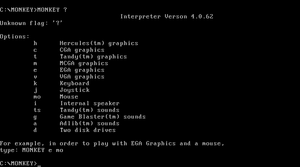 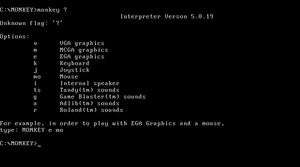 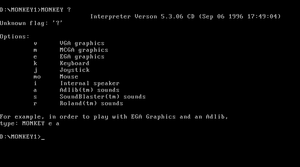 The game auto detects the hardware on each startup. There is no configuration file.
It is possible to override the detection by specifying options behind MONKEY.EXE