The Chronicles of Riddick: Escape from Butcher Bay

Not available digitally.
A visually enhanced remake is included with The Chronicles of Riddick: Assault on Dark Athena. 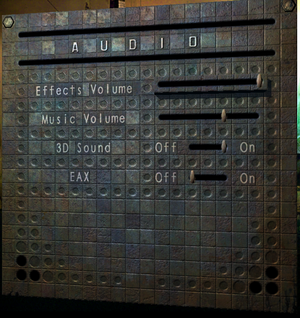 There is an OpenGL-related crash after starting the program. For those with Nvidia hardware, this can be fixed by downloading Nvidia Inspector and setting the Extension Limit to 0x00001B58. This will also allow you to choose 'Shader Model 2.0++', which is otherwise locked out. For AMD users there is no known fix right now

Updating to v1.1 should allow newer video cards with openGL > 1.5 to run the game.

When playing with "Shader Model 2.0++", texture flickering occurs in lit areas while using the "Eyeshine" mechanic in-game. This can be fixed by simply changing the "Shader Model" to something else in the video settings.

If you use a higher polling rate than 125 Hz you will get some twitchy mouse movement. The only 2 known workarounds is to use 125 Hz polling rate or plug in a controller and use that to play.[citation needed]