Running the game on modern Windows may require multiple steps and workarounds. See Essential improvements and Issues fixed.
Installer for retail version is 16-bit only. Use the Alternate installer for 64-bit versions of Windows.
Shares many similarities with standalone expansion Jedi Knight: Mysteries of the Sith in terms of its engine and performance. Fixes for one may work for the other.

The GOG.com and Steam versions have been patched for compatibility and include working music.[3][4] 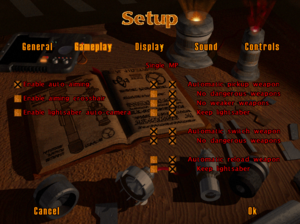 Allows the game to be installed from the original CD on 64-bit systems.

Allows the game to run properly on modern computers, adds some mod support, improves and includes more graphical options for the game.
Requires the original, installed-from-CD version 1.0 executable, which can be obtained with jkversions for the Steam and GOG releases.

Alternative to jkgfxmod
Includes an installer for 64 bit systems
Fixes black screen when 3D acceleration is enabled
Fixes a ghosting bug when 3D acceleration is enabled
Forces the game to run at your desktop resolution. Ultra-wide and 4K supported
Disable mode changes when entering the menu
Forces the game to run in 32 bit color depth
Fixes the HUD getting smaller at higher resolutions
Automatic FOV correction in any aspect ratio
Disables the 'manual' mipmapping employed by the game that makes distant textures blurry
Fixes music playback
Better compatibility with Xinput gamepads

Updates the game to version 1.01 and fixes some joystick and lockup issues.
Included in digital re-releases.

Includes patch v1.01 and adds compatibility for modern Windows, mod support and team chat in multiplayer.
The pre-patched version linked above works with both the original CD and digital releases of the game.
Alternately, the original (non-pre-patched) Unofficial Patch may be used, but it requires the original, installed-from-CD executable.[5]

Replace the music tracks with higher quality ones ripped from the original CD.

Requires the music wrapper (winmm.dll) to be in the installation folder.
Can be combined with the wrapper to allow the retail CD release to play music without the CD.

Before and after the High Detail Mod.

Make the game always use the highest quality textures and models, instead of using lower qualities the further away they are (and leading to unsightly transitions).

Doesn't add or replace any textures or models.
Can be used alone or in conjunction with other texture/model mods. 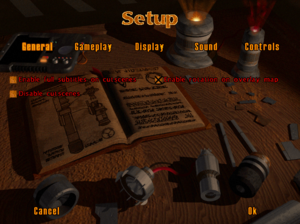 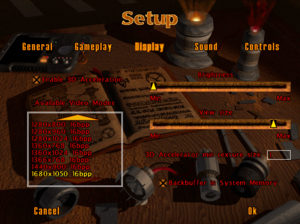 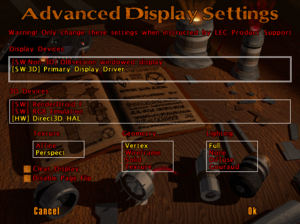 Field-of-view is hardcoded to 90° in the game. 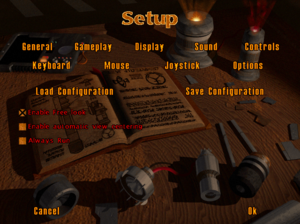 The mouse wheel can normally only be bound to a few movement actions, and cannot for example be used to switch between force powers or weapons. 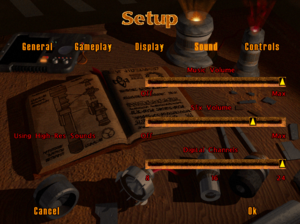 This issue is present in the original CD release and may also apply to re-releases patched with the Unofficial Patch.

Running the game with 3D acceleration turned on may cause crashes or graphics problems (ex. black screens) on some modern machines.

This issue is present in the original CD release and may also apply to releases patched with the Unofficial Patch.

The game updates camera movement at only 30 FPS, even though the game runs at 60 FPS. This gives the appearance of poor performance and can be improved by capping the framerate below 48. Additional side effects (such as first-person weapon animation) may also appear with high framerate.

HUD is missing or screen has black border[edit]

Music doesn't play (after exiting the bar) or loop or the volume can't be adjusted.

This mod replaces models with higher quality ones taken from Jedi Knight: Jedi Outcast and some completely remade from scratch. It requires the Unofficial Patch and jkgfxmod to be installed.

The original HUD is too small at high resolutions. This mod replaces the default GUI and HUD elements with larger, higher resolution alternatives.