For Seven of Nine to be voiced by Jeri Ryan (who played the character in the TV series), you must install the official 1.2 patch. The GOG.com version includes this by default.

May run into Insufficient Disk Space Error while installing patch. Just click Ignore and the patch will install without incident.

Intro movies can be skipped by launching the game with -nointro parameter. The best way to do this is create a shortcut and then append the parameter in Target box of the shortcut, ensure there's a space before typing the parameter

The main server browser hosted by Raven Software is unreliable, so the community has their own. A user-friendly browser application Pathfinder is available. 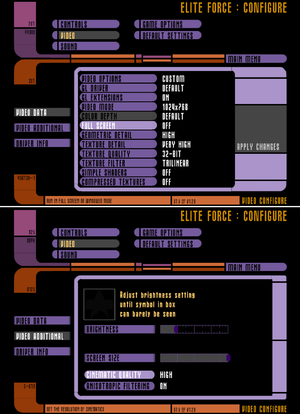 Custom resolutions can be set in efconfig.cfg. Image is Vert-, gameplay FOV can be increased in efconfig.cfg to compensate, but cutscenes and weapon models have incorrect FOV. An external fix can be downloaded for this.

If playing at a custom modern resolution, or when using custom content, the game may crash to the main menu with a com_hunkmegs error listed in the console.