Sonic Adventure 2 is a cartoon third-person platform game developed by Sonic Team and published by Sega, and was released for PC on November 9, 2012. It is the sequel to Sonic Adventure.

The game was originally released worldwide on June 23, 2001 for the Dreamcast. It is historically notable for being one of the last games released for the Dreamcast and the final first-party game to be developed by Sega before becoming a third-party company after leaving the console market. It was also released during the 10th Anniversary of the Sonic the Hedgehog franchise. Sonic Adventure 2 restructures and streamlines the gameplay elements from its predecessor, featuring "Team Hero" (Sonic, Tails, and Knuckles) and "Team Dark" (Shadow, Dr. Eggman, and Rouge) with platforming, mech shooting, and treasure hunting Action Stages, all played in sequential order.

The game was later ported to the GameCube in 2002 as Sonic Adventure 2: Battle as an updated version of the game, featuring an expanded multiplayer mode and readjusted gameplay elements. Despite being ported to newer hardware, it also has simplified fog, missing vertex and colored lighting, and some content that are changed or missing compared to the original Dreamcast version. See TCRF for details and this video for cutscene-related changes. Similarly to Sonic Adventure DX and its subsequent ports, the 2012 PC port of Sonic Adventure 2, as well as the Xbox 360 and PlayStation 3 versions, was based off the GameCube version, with the expanded multiplayer and Chao Karate content from Sonic Adventure 2: Battle being locked behind a separate DLC purchase.[1]

The game's physics and speed are tied around 60 FPS, meaning slowdowns on lower end machines and speedups with high refresh-rate displays. Various mods are available to restore original features from the Dreamcast version and address issues with the PC version; see Moddifications for recommendations and how to setup MainMemory's SA2 Mod Loader to ease the installation of mods. 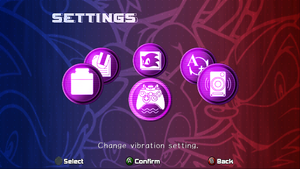 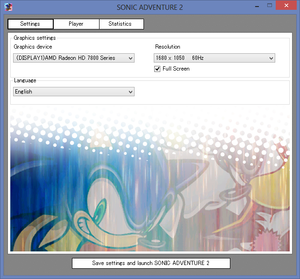 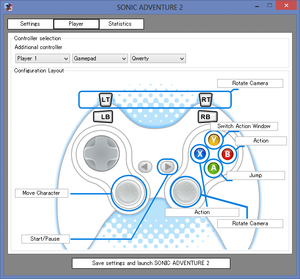 On AMD cards, menus won't render if the resolution exceeds 4579 x 3965, on either axis.[citation needed]

Game freezes and hardlocks when trying to load a stage[edit]

This issues is related to the SA2 Mod Loader. Rebooting the computer with the mod loader uninstalled seems to help temporarily.[5] An issue ticket can be found on the Mod Loader's GitHub repo. Another potential solution is to to launch SA2 Mod Loader, click "Uninstall loader" to disable the mod loader, launching the game normally via Launcher.exe and exiting the game, and then re-launching the Mod Loader and clicking "Install Loader" to re-enable it.

Some effects such as rain, fire, smoke, footprints, and dirt from digging as Knuckles or Rouge are missing on integrated graphics with application optimization mode enabled.

Launcher crashes when trying to start the game, No resolution options available[edit]

A utility that can convert main game and Chao Garden save files from the GameCube, Xbox 360/PlayStation 3, and PC versions to another platform. Can be downloaded here.