From PCGamingWiki, the wiki about fixing PC games
(Redirected from Scratches Director's Cut)

Game removed from GOG.com and Steam in January 2015.[1]
Steam version can be run without Steam running, and is DRM-free.[2]

The scream.cfg location differs between releases. 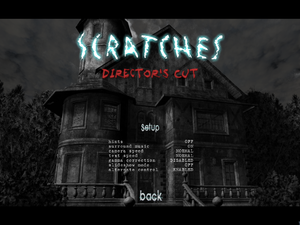 Attempting to run the original Scratches or Scratches: Director's Cut on Windows Vista or above will cause Windows to crash to a blue screen.
This issue is caused by how modern Windows handles an outdated call for the monitor refresh rate.

The original version of Scratches is prone to crashing on modern computers.
This issue was initially due to features that were added to Intel CPUs at the time, features that have since become standard in all Intel CPUs.

Crashing during The Last Visit (Retail)[edit]

The initial release of Scratches Director's Cut came with only one disc, which contained a game breaking bug that would cause the game to crash during the additional content chapter of the game.
Future releases had two discs, with the second disc containing copies of the patches below, as such this issue should not be present on those copies, so long as the patches on Disc 2 are installed.

The game does not run in Widescreen with 16:9 resolution. It is configured to 1024 x 768 with an aspect ratio of 4:3, so there will be black bars surrounding the image on your standard 1920 x 1080 screens. Editing the SCREAM.CFG file to custom resolutions (Height and Width) is NOT recommended as it can cause major issues

The Function keys are assigned by the game, You must re-bind the F12 key to F3, F6, or F11 to take a screenshot in Steam:

F1--HINTS ON/OFF The hints lie in Michael's dialogue. When turned on he will tell you more information. F2--SURROUND MUSIC ON/OFF F3-- F4--LOOK DOWN F5--SAVE GAME F6-- F7--LOAD GAME F8--LOOK UP F9--CAMERA SPEED SLOW/NORMAL/FAST F10--TEXT SPEED SLOW/NORMAL/FAST F11-- F12--GAMMA CORRECTION LOW/NORMAL/HIGH/DISABLED ESC Key: Exit to Main menu to load, save, go to settings. Also skips cutscenes, intro and credits. You can manually save at anytime or use the F5 key for a quick save.