Rise of the Triad

This page is for the 2013 remake. For the original game, see Rise of the Triad: Dark War.

Plenty of graphics options accessible via game launcher.
GOG.com and Steam players can play multiplayer together.[1]
Blackscreens on multi-monitor systems. Sound and game work fine, but graphics fail to appear.

Game features console access with some basic commands. Console is accessible via ~ or TAB key.
To access all available commands type first letter and list of all commands that starts with this letter will appear.
Some commands are considered as cheats. To enter cheat mode you need to enter dipstick command to the console first. This will disable score and achievements for current level.

You can streamline your frequently used commands by binding them on a specific key.
Some keys cannot be mapped from game menu. Use this guide to rebind commands to your desired keys. 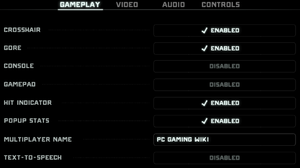 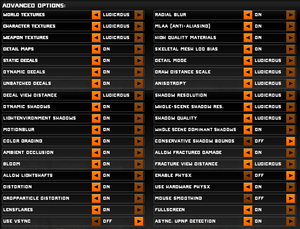 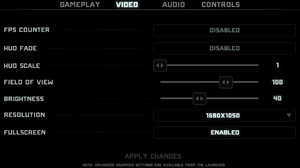 Some people experience parts of Menu screen to be shifted outside the monitor when using Ultra-widescreen resolution.

Although there is FOV slider, you can tweak FOV via console or configuration file.
Flawless Widescreen supports this game.
There is hard range limit to the FOV values. You can only set FOV in 20-120° range. 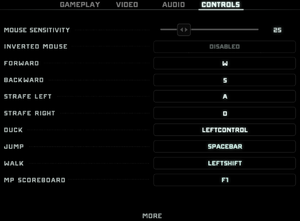 Mouse acceleration seems to be turned off however there is mouse filtering turned on by default causing strange mouse behavior. See fix below.

There seems to be an issue with multi-monitor setups where game fails to initialize video output. Disable all but one screen as a temporary fix.
Can be 'fixed' by using Alt+↵ Enter to enter windowed mode, then using Alt+↵ Enter again to return once all intro videos played (Switch back after Unreal Engine video)

Unable to bind some keys[edit]

Game does not allow players to bind special keys (num keys, page up, down etc.) to commands.
See Custom commands and key binding fix section for a fix.