Not to be confused with The Prototype.

Replaces almost all of the old resolution textures with better ones (map, protagonist, etc).
Uses Texmod to apply all of the new textures.
The pack includes a custom Texmod that's able to make the game run if you have a CPU with more than 4 cores. 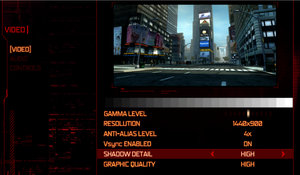 Some resolutions may not be supported. This fix makes the game run at your desktop resolution.

This section may require cleanup to meet basic quality standards. The specific problem is: Multiple contradictions and incorrect formatting. You can help by modifying the article. The discussion page may contain useful suggestions.

In-game audio is very quiet except for cutscenes. There is no known solution.[4][5]

The Game use native 5.1 there is no stereo Downmix. So in a Stereo setup you don't have the Center and Surround Speakers so the volume is very low except for Cutscenes (they are in Stereo).

Use an alternative Sound Driver like Razor Surround. It's simulating a Surround effect while using the Full Speaker Configuration.

If you have a Asus Xonar Card open the Xonar Control Center in the Mainmenu select 8 at Audio Channel and 2 at Analog out. Now The Asus driver makes the Downmix from any Surround Source.

I have tested both variants and use the Xonar solution because i have these card so no need to install any other thirdparty Software.

No shadows with AMD/ATI graphics cards[edit]

This game has a similar bug as with the sequel, where shadows are not rendered properly on AMD/ATI Radeon cards.[6] This can provide sub-optimal graphical fidelity for many AMD/ATI users.
So far, no known fix for Prototype or the sequel exists.

This is caused by the engine incorrectly overpolling the USB I/O in Windows.[7]

Having non-default sound quality settings can cause sound problems in this and some other games.

The game may crash on a CPU with more than 8 threads.

Fullscreen mode defaults to 100 Hz, even if the screen refresh rate is set higher than that.
Doing this can help achieve a more stable fps while playing

You don't need Special K for this to work