Not to be confused with Eye of the Beholder III: Assault on Myth Drannor.

This page is for the 2001 sequel using 3rd Edition Dungeons & Dragons rules. For the original 1988 Gold Box game, see Pool of Radiance.

A known bug for the uninstaller included in the original 1.0 release deleted system files when the game was uninstalled, causing the operating system to fail. This can be fixed by using the 1.1 uninstaller patch (already included in newer releases).

Two retail versions are available: the original 1.0 release and a re-release that has been pre-updated to version 1.2 (German release: 1.28) and also includes the 1.1 uninstaller.
This game is not available digitally.

If your original version is 1.0 (version can be checked in the main menu, bottom right), you will first need the 1.1 uninstaller patch to avoid the uninstaller deleting system files. This patch is not included with the 1.2, 1.3, or 1.4 updates. This patch is not necessary to install if you have the updated 1.2 retail re-release, as that version includes the 1.1 uninstaller.
The latest official patch is 1.4 (different files depending on language version). It includes game fixes from the 1.2 and 1.3 updates, but does not include the uninstaller from the 1.1 patch so that will need to be used separately if you have the original 1.0 release. 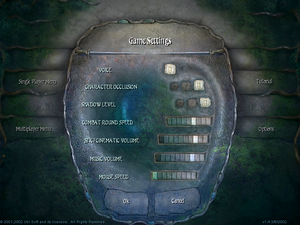 In-game help menu only displays the default hotkeys regardless of what you actually have them set to.

Use this fix if your characters appear as skeletons at the start of the tutorial, or if you can't see barrels and chests - a good way to check if you have this bug is if you play the tutorial and can't see the barrels in the room where you're supposed to interact with them.

There is a rare bug where you permanently lose hitpoints after unequipping an item that increases Constitution (CON). The bug only happens under these circumstances:

Also, you generally get less HP on levelup if wearing CON-increasing items, so unequip them before leveling up.[1][2]

Sometimes doors in the dungeon re-lock after you had previously opened them with a key, but the key is gone after use. This is a game-breaking bug that makes you unable to progress at all if it hits certain doors.[3][4][5][6] Despite what the patch notes say, this bug is still unfixed for some doors, at least for the first two ones in the first dungeon. A common scenario is that you explore a section of the first level, find Beriand's staff and return it to him - then after going back, the doors will be locked.[4][5] This makes you unable to finish the game, you have to restart and hope it doesn't happen again.

When this bug happens, some (not all) loot containers also seem be refilled, so you can loot some items twice. So it seems to have reset some parts of the level, that's what might cause the doors to be closed again. However, enemies don't respawn.