Reported to run well even on older machines.[citation needed]

A non-Steam version is available in China on Tencent Games Platform.[1]

VideoSettings.xml includes resolution, vsync and MSAA. user.cfg has to be created by user. 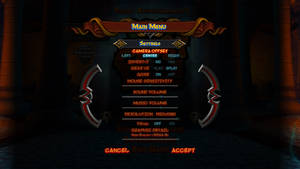 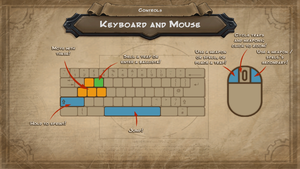 The default keyboard/mouse layout for Orcs Must Die! 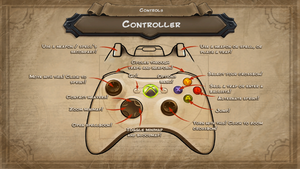 The gamepad layout for Orcs Must Die!

This issue is most likely caused by incompatibility with certain graphics cards. You can avoid this by lowering the graphics detail slider in the game's options.

Most recent game patches should have addressed this issue. If you are still experiencing this with Nvidia SLI setup try following fix.

Most recent game patches should have addressed this issue.

Missing Knight of the Order DLC[edit]

This issue is most likely to occur with pre-ordered versions of the game, and results in the Knight of the Order DLC not appearing in game. To fix this, go to <Steam-folder>\appcache\appinfo.vdf and delete this file before restarting Steam. This file will then automatically be recreated and the DLC should appear in-game.

If a machine is below the minimum requirements to run the game then this issue may occur; involving incorrect positioning of many character models and equipment. Often orcs may appear stuck in the ground and their heads will be colliding with the floor mesh. This is most likely to occur on PCs with single-core processors, as the game itself is optimized to distribute animation-related processes to a second core. Without this core the game will not properly render most enemy units, meaning the game is essentially unplayable on single-core systems. The only solution to this is to run the game on a computer which utilises a multi-core processor.

If your computer has a dual or quad-core processor and you are still encountering this issue, you should check that the game is not being forced to run on a single core. To do this, minimise the game whilst it is running and open the task manager using the keyboard shortcut Ctrl+Alt+Del and go to the 'Processes' tab. Here, find OrcsMustDie.exe in the list of processes and right click it before selecting 'Set Affinity...'. If you are on a dual core system, a box will appear with two processor cores listed - most likely CPU 0 and CPU 1. On quad core systems, this list will most likely also include CPU 2 and CPU 3. Tick the 'All Processors' box and press OK - the game will now correctly distribute processes amongst all processor cores.

Orcs Must Die! has a limited capacity for modding; the developers implemented the ability to be able to customise the content of orc waves for existing levels. To do this, go to <path-to-game>\Data\. From here you will need to create a new folder called 'mod', and another folder within it named 'onslaughts'.

By editing the default onslaught files (downloadable here) and putting them in this folder, you can use your custom levels essentially as an override so that the game will load your levels. Note that you should not rename levels when editing them as the game will no longer recognise them. Also of importance is the fact that using these overrides disables leaderboard scoring and statistics for as long as you are using the modified onslaughts. To return the game to its original state after modification, simply delete the contents of the onslaughts folder.