Need for Speed: Hot Pursuit is a 2010 racing game developed by Criterion Games and published by Electronic Arts. It is the sixteenth game in the Need for Speed series. A throwback to the original Need for Speed III: Hot Pursuit (1998) and Need for Speed: Hot Pursuit 2 (2002), Criterion's Hot Pursuit returns to the roots of the NFS franchise by having players drive sportscars and exotics as a racer or a cop in beautiful environments, taking place in a region called Seacrest County, which is inspired by places found in the West Coast of the United States. The game is also noted for the introduction of NFS's asynchronous multiplayer system, Autolog, where players can compare their best times in events against their friends.

The game was delisted from all online storefronts in 2020 in favor of its remastered release.

No DLC other than the Limited Edition and EA Crew Edition content was made available for the PC version of the game, with these also being available through retail copies only. However, the 2 exclusive vehicles and 6 early unlocks from the Limited Edition (also included in the EA Crew Edition), 7 exclusive vehicles from the SCPD Rebels Pack (available in the PC version through the EA Crew Edition only), and several additional events from the Lamborghini Untamed Pack, Porsche Unleashed Pack, and Super Sports Pack (none of which had a PC release) can be modded in on the base version of the game from digital storefronts with a mod.

Patch 1.0.5.0 (NFSHP_1000_to_1050.exe; PCGW mirror) is the last patch for the game. It is only required for retail version of the game. Digital versions are already patched.
Changelog (and PCGW mirror of all patches). 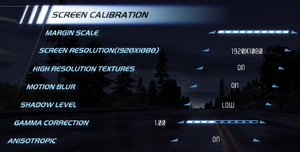 Due to the game's deferred rendering implementation, Super-Sampling-AA seems to have better performance than MSAA, if using a utility such as Nvidia Inspector.[citation needed]
Forcing Vsync to off via GPU panel does not work on AMD cards.[citation needed]

The following mods can be used simultaneously.

Disables the lens flare effects that are applied over the sun, street lamps and headlights/lightbars without affecting the basic sun texture, volumetric light shafts and bloom effects.

No HUD and real lights mod[edit] 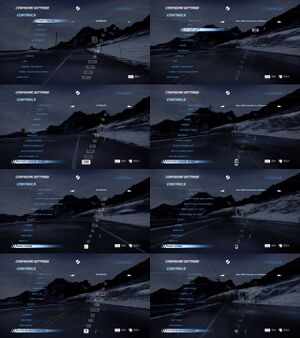 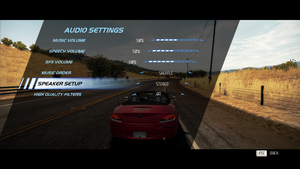 The game's sound-mix is bad. The low audio-volume of the player-car-engine was fixed in v1.0.2.0 to only some extent. To improve sound-quality copy DSOAL + HRTF into the game dir to greater enhance car-engine-volume (also option of no HRTF attached). Make sure you have stereo set in audio options for 2.0 configurations (alternatively use IndirectSound (no HRTF) and .ini). In DSOAL the changes are even pushed forward in this aspect. Now you may like to lower SFX volume to hear the music louder. Alternatively you can test out 5.1 setting in game options for better results with IndirectSound if DSOAL doesn't work on your current Windows 10 build.[3]

By default, the game places most of its processing load on the first CPU core only, which may cause stuttering and occasional framerate dips on some systems while traversing through the map. To fix this, the affinity of the NFS11.exe process must be changed to exclude CPU 0; after doing so, the load should equally spread across the remaining cores.

Controls settings not being saved[edit]