The keyboard is a primary method on input for PC gaming, and computing in general. Keyboards can some with a PS/2 connector or a USB 2.0 connector, but only USB are widespread use today. Keyboards provide numerous buttons for the gamer to use, where each button is given a separate function based on the game being played. It is also used for text chat in games that support it. All keyboards come with a minimum ~104 keys, with gaming keyboards providing more.

There are several keyboard shortcuts/combinations that all PC gamers should know.

Alt+F4 Pressing Alt+F4 is used to close the open game or active window. Most games will respond to this shortcut and close the game, but some games may disregard this shortcut.

Ctrl+Shift+Esc On windows computers, this combo will open up the Task Manager, bypassing the need to Ctrl+Alt+Del. Like Ctrl+Alt+Del, most programs will allow you to open the task manager in this manner, even if the program has stopped responding.

Ctrl+F Although not particularly useful in game, Ctrl+F opens up the search function for whatever window you have open. For example, in most modern browsers, pressing this shortcut will bring up the search box, and any words you type in the box will be searched for on that web page. This can be very handy for finding something in long documents, like a game walkthrough.

One feature of most modern gaming keyboards is Many Key Rollover. Key Rollover is when you press multiple keys at the same time but some of those keys do not register. For example, in the PC version of GTA: San Andreas one of the driving school missions required you to press 5 different buttons simultaneously to perform a task. On most nongaming keyboards, one of the key presses would not register, preventing 100% completion.

Most gaming keyboards have some form of Many Key Rollover, which aims to detect as many simultaneous key presses as possible, depending on the circuitry layout.

PS/2 keyboards have the capacity for full N Key Rollover, meaning you can press as many buttons as you want and the keyboard will always recognize your key presses. This is the main reason that some prefer PS/2 over USB. 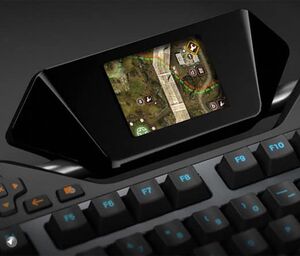 There are some other features that manufacturers will add to gaming keyboards. LED backlights can illuminate each key, and in some cases change the color of the backlight.

Some manufacturers have added a small liquid crystal display to their keyboards, allowing you to show system info or game statistics (depending on the software). Some high end and concept keyboards can even feature additional buttons with built in displays, allowing you to set the icon that each button displays.

Some keyboards feature a USB plug or the mic and headset ports. These can allow for faster setup, or better accessibility.

Razer is well known as a producer of gaming keyboards, in addition to many other gaming accessories.

Corsair, Mad Catz, Microsoft, and Thermaltake all have their own lines of gaming keyboards.

Use Microsoft's official Disable/Enable the Windows key Fix it wizards.

Some gaming keyboards have functionality built into the keyboard to toggle the Windows key on and off. Some Logitech keyboards have a switch built that performs this function.

WKey Disabler is a small portable utility, which disables the Windows key while the program is running in the system tray.

Some games support just one specific keyboard layout. It is however possible to install additional keyboard layouts and switch between them with shortcuts.

It is then possible to switch between layouts with Alt+⇧ Shift.