This page is for the original game. For the 2015 remake, see Heroes of Might and Magic III HD.

The Mac OS and Linux versions of the game are no longer sold, and existing copies of those are hard to run on modern systems. The easiest solution for running the game on Linux or OS X is buying the Windows version and running it under Wine. Further information on how to do that can be found on AppDB. Alternatively, VCMI can be used to run the game.

All official patches include balance changes and bug fixes on par with each other.

Unfortunately, the Polish version still uses patch 3.2, instead of 3.3 or 4.0, but there is unofficial patch, that updates it to the newest version.

Requires Shadow of Death patched to v3.2 or the Complete Edition.
Allows higher resolutions along with 32-bit color support, multiple renderers and upscaling methods, bug fixes, new multiplayer lobby, and other features.
Bypasses compatibility issues faced by the unmodified game version.
Includes Verok's GL Wrapper (archive) as one of the renderer options.
Compatible with several mods, most notably Horn of the Abyss for which it has a special multiplayer lobby and shares some developers. 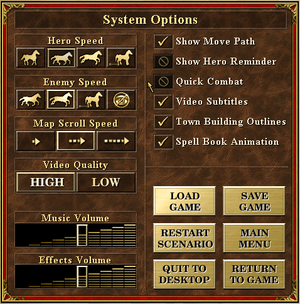 Unmodified, the game requires DirectPlay to be enabled for multiplayer to work. The HD mod bypasses this requirement.

Game crashes unexpectedly after some time

This is caused by a bug in the game, experienced only on multi-core or hyper-threaded processors. Newer GOG.com versions do not have this issue.

In the Wake of Gods - an unofficial expansion pack adding new units, mechanics, resources and easier modding possibilities.
Horn of the Abyss - popular unofficial expansion pack adding the Cove town, new neutral units, resources, campaign missions and map objects. Use this patch for compatibility with Polish version.
VCMI - an attempt at rewriting the whole engine to make it customizable, portable and fully cross-platform.