SafeDisc retail DRM does not work on Windows Vista and later (see above for affected versions).
Game is not available digitally.
Owners of the Loki Software Linux port of the game should consider using the installer from LIfLG, if you wish to run the game on a newer system. It is currently in beta.

Model detail setting is available in the video options menu, but it can be overridden to force the game to render highest quality models all the time. 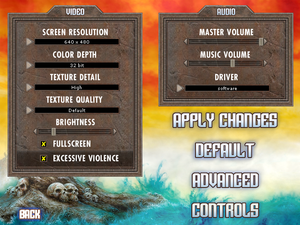 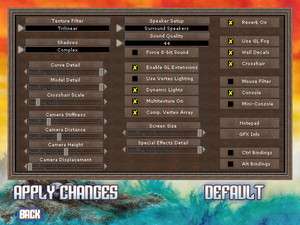 Custom resolution can be set in the configuration files, but also requires a modified gamex86.dll file for Hor+ FOV.

See the WSGF entry for a permanent FOV method. 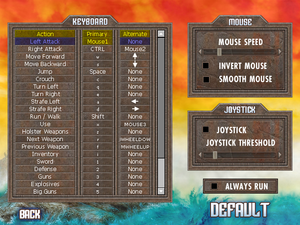 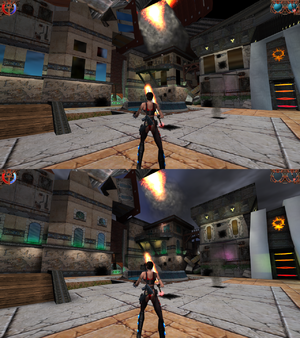 This performance issue can occur with newer graphics cards supporting OpenGL 4.0 and newer, it is most common on Windows Vista and Windows 7. Since the game is based on the Quake 3 engine and is using the same or a similar OpenGL version, the graphics card driver will handle the game correctly if it thinks that it is Quake 3.

If Use Vertex Lighting is checked in the advanced video options menu the maps will be missing some shadows, lights and textures(windows), and in the later levels the skybox will be glitched.

Health and water bar are rendered without effects.

This happens due to the fact the game uses OSS for sound output only.

A short bonus level is included with the game, that shows various enemies and animations.