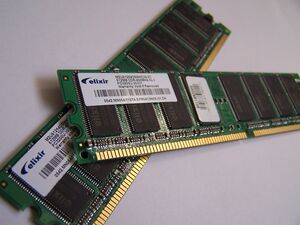 A pair of RAM modules

A RAM disk is a virtual hard drive that is stored within your computers RAM. RAM is incredibly fast and is even faster than a SSD. It can be used to significantly speed up loading times of any game, but the contents of the RAM disk are lost upon a restart of the computer.

Advantages of using a RAM disk for gaming[edit]

Disadvantages of using a RAM disk for gaming[edit]

Game is smaller than RAM disk[edit]

Once it is all copied, find the games main .exe file on your RAM disk, open it and start playing at increased performance and speed.

Game is larger than RAM disk[edit]

It is still possible to use this method to load some commonly used files in large games to increase loading speeds by using symbolic links.

Choose large files rather than lots of small files. The most commonly accessed game files are often the largest, for example:

Rename the files to keep as a backup. For example, for World of Warcraft, world.MPQ, art.MPQ can be changed to world_BACKUP.MPQ and art_BACKUP.MPQ

Symbolic links allow Windows to access files on the RAM disk as if they had not been moved at all from the hard drive.

Now whenever the game attempts to read data from the files/folders you linked, it will read them from the RAM disk instead by following the symbolic link shortcut. This will greatly improve the speed of your game. If there is no real increase then try using different files, or buy more ram to be able to transfer more data to the RAM disk.