Rift Core 2.0 update introduces new Dash UI and new minimum and recommended system requirements[1]
Playing games from outside the Oculus Store requires enabling Unknown Sources.
Some games may only support Rift DK1 or DK2, and not support the Consumer Version of the Oculus Rift. LibOVRWrapper can make some DK1/DK2 games compatible with the consumer headset. 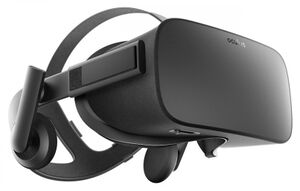 List of which graphics cards meet the minimum and recommended specifications

Discontinued in 2021. Succeeded by Oculus Quest 2.

Standalone mobile headset which can be connected into PC using Oculus Link cable.
Discontinued in 2020. Succeeded by Oculus Quest 2.

Standalone mobile headset which can be connected into PC using Oculus Link cable.
A Facebook account is required to use the Quest 2. 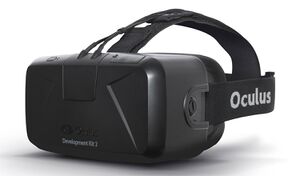 Oculus Rift Development Kit 2 aka DK2 was the second release of the headset for developers. Supports seated and standing positional tracking. It is still supported within Oculus Store, and can be used with an Xbox One Controller to play non- touch controller games.

Some games on Steam will only support the Oculus Rift Development Kit 2, and will not work with the Consumer Version Oculus Rift. 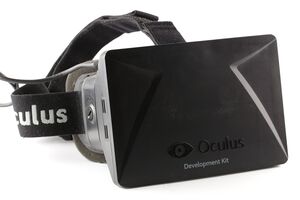 Oculus Rift Development Kit 1 aka DK1 was Oculus' first release of a headset[2]. It only supports rotational tracking, o positional tracking, thus it can only be used for seated and a few standing rotational experiences. It not supported by the Oculus Store. 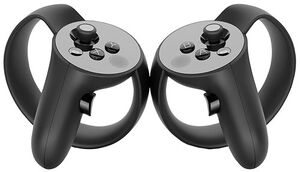 Comes in the box, can be used to play simple movies and experiences that don't require interaction or gameplay.

Oculus Touch comes with an additional Oculus Sensor, and can be either be bought separately from the Oculus rift, or brought together in the Oculus Rift + Touch bundle. they use positional tracking, and have a thumbstick, trigger, grip analogue, two face buttons and a system button. The thumb and the index finger are positionally tracked.