Has VR Support (via DLC), similar to Gal*Gun VR, which did not make it to consoles with VR support.
Limited graphics and VR options menus. 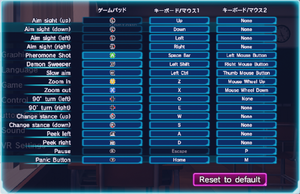 VR requires the purchase of a DLC.

When using the ReVive patch with Windows Mixed Reality, there is a chance that your player height might be significantly taller than intended. This may result in darkness (without crouching or bending over) when not using the Screen Fading Removal Fix, or your head being through the roof with it.

"The UE4-GalGun2 Game has crashed and will close, Fatal error!"[edit]

The System Requirements for Gal*Gun 2 are likely copied from Gal*Gun VR, Which is why the PC system requirements are overkill (When not running in VR Mode) for something that runs at 1080p @ 60FPS on PS4, and 1080p @ 30FPS on Switch (When Docked). Just keep in mind that if you are below these system requirements, it might not be possible to get technical support from the developers.