Gabriel Knight: Sins of the Fathers

This page is for the original 1993 game. For the 2014 remaster, see Gabriel Knight: Sins of the Fathers - 20th Anniversary Edition.

Can be run under ScummVM.

Install the relevant official patch if you are using a retail version. The latest patch is 1.0a (GKCDPAT) for the CD-ROM version and 1.0b (GKPAT10B) for the floppy release.
Install the relevant unofficial NRS patch to correct some game-breaking issues on modern systems (latest official patch required). GK1CD_NRS is for the CD-ROM and GK1_NRS - for the floppy version. For other solutions to these problems, see: Issues fixed. 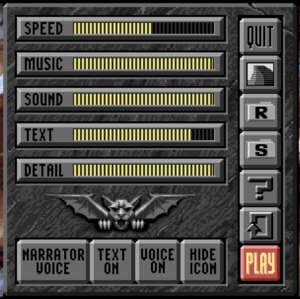 Before anything else, get the latest patches for your respective game version. Also, check out Sierra's help page for solutions for known issues.

Depending on your progress, at the beginning of day five Grace may give you the Rada Drum Book twice, and when the phone rings Gabriel says he'll get it but he never moves. This can be fixed the following ways:

Before you start day 5:

Depending on the speed of your computer, it might be impossible to get into Mosley's office on day 6 because the solution is timer based and the distraction might not last long enough to reach the office. To progress, you can use either of the following options: