This page is for the episodic, reworked version. For the original 2004 release, see Fate/stay night.

The PC version of Fate/stay night [Réalta Nua] is based on the PlayStation 2 port, and unlike the original Fate/stay night, the three routes in the PC version of Réalta Nua are divided between three separate episodes with their own executables, starting with the Fate route released on December 23, 2011 through Amazon.co.jp. This version also has the adult content from the original game removed, altering some of the game's story scenes to reflect these changes, however, it also features the new content that was previously exclusive to the PlayStation 2 version prior to this PC port. See this FAQ post from the Réalta Nua English Patch tumblr for content differences. This game, as well as its subsequent re-releases on PlayStation Vita, iOS, and Android was never released outside of Japan. Unfortunately, for reasons unknown, the PC version of Fate/stay night [Réalta Nua] is no longer being distributed from Amazon.co.jp.

Despite the game not being available outside of Japan, fan-made English patches are available for the game, one that can simply translate the PC version of Réalta Nua into English, while the other, in essence, provides the best of all worlds from the original Fate/stay night and its later re-releases.

A simple vanilla English fan translation patch for those that want to experience the PC version of Fate/stay night [Réalta Nua] as-is. 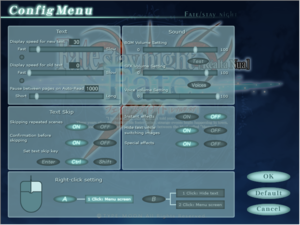 The stock uncensored sex scenes from the Ultimate Edition's decensor patch is considered low quality, and in one case, anatomically incorrect. Thorny Rose Studios' mod replaces them with improved, higher quality equivalents that were left mostly unused in the decensor patch, thus providing better consistency in quality of the decensored sex scenes. A version is also available for the previous mirror moon TL Insertion Project.
This mod assumes you have patched the game with the either Ultimate Edition or mirror moon TL Insertion Project, and have installed their respective H patches (patch_h.xp3) as well as the decensor patch (patch_decensor.xp3) for Ultimate Edition.
The mod's website also features a link to a comparison gallery of the decensor patch's stock uncut sex scenes and improved equivalents, however, some scene in comparisons contain spoilers, so view them at your own discretion.