This page is for the original 2004 release. For the episodic, reworked version, see Fate/stay night (Realta Nua).

Fate/stay night is an adult visual novel developed by Type-Moon.

The game is the first installment of the Fate series of the Nasuverse. It was originally released in Japan on January 30, 2004 with its First Print Limited Edition release, followed by a standard edition that was released on March 26 the same year. The game later received subsequent re-releases on PlayStation 2, PC, Vita, iOS, and Android as Fate/stay night (Réalta Nua), which removed the adult content from the original game, thus changing some story scenes to reflect on these changes, but featured new content that was exclusive to the PlayStation 2 version until its 2011 PC version. The original 2004 game was re-released along with its sequel, Fate/hollow ataraxia, as part of the Fate/stay night＋hollow ataraxia Set for the series' 10th anniversary in 2014 and was reprinted in 2019.

Despite this game not being released outside of Japan, a fan-made English patch by visual novel translation group mirror moon is available.

A trial version is available from the developer's website.

An official "NoCD" executable for the 2004 release can downloaded from the developer's website here. This executable is not needed when installing mirror moon's English patch which removes the disc check for the CD and DVD releases. 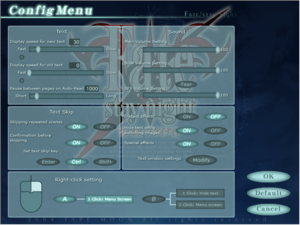 The sex scenes are censored in the original Fate/stay night. Thorny Rose Studios has created a mod designed to work with mirror moon's English translation patch that removes the mosaic censorship of the game's sex scenes.
This mod includes a folder containing a comparison of the censored and decensored versions of game's sex scenes, however, some scene in comparisons contain spoilers, so view them at your own discretion.