The source code was leaked in 2000.
It is highly recommended to play the game with a joystick
The manual is required to fully understand the underlying game mechanics
Most of the community has switched over to Falcon BMS, a heavily upgraded fork of F4's source code. 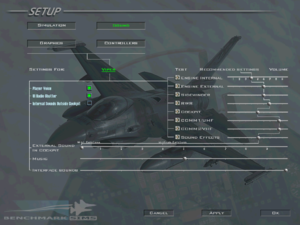 BMS is the latest and greatest Falcon 4.0 mod currently available. Released September 2011, it brings total Windows 7 compatibility and support for modern gpus among many other bug fixes, graphical enhancements and avionics and realism improvements such as completely new Flight Modelling, DirectX 9.0c support with Shader Model 3.0 and HDR to name a few. More info regarding BMS is here: BenchMarkSims webpage 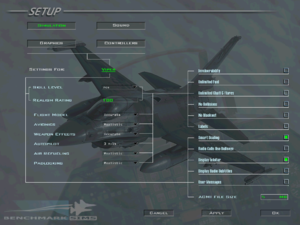 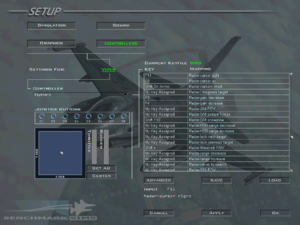 Graphical bugs are experienced during gameplay while running in Windows 7. Some textures will show bright purple sections with and without the patch and with the patch, text is unreadable while using hardware rendering. Switching to software rendering solves this but the game slows to a crawl while the cockpit is in view. Sometimes the menu screens will bug, certain elements not disappearing when changing menu - running in Windows 95 compatibility mode could fix this (most prominent on Allied Force re-release).