Dune II: The Building of a Dynasty

Released as Dune II: Battle for Arrakis in Europe.

Dune Wiki - The Duniverse
Dune2K.com - A major Dune fansite with an active community

Although a Dune II "demo" is available it is not actively playable; the executable more or less plays the missions out it's self without your intervention much like a pre-release demonstration video.

The European version has a different title screen subtitle with its EU name and lacks the into voice over. These are minor aesthetic changes and can be changed back with this unofficial patch. Another similar patch that preserves the European title screen can be found here. Yet another minor graphical difference is that the pause menu is not centered in the EU version; a hack to fix it can be found here. The European version also has additional languages. There are also some minor version specific bugs for each though these are ironed out by the 107 patch fix below.

Download link
Official patch which corrects issues with the Starport building. The European versions come pre-updated, making this unnecessary for it.

Download link
Official patch which enables the use of multiple sound devices simultaneously (i.e. MT-32 music with SoundBlaster digital and FM audio). A separate version for the European release can be found here.

Download link
Changelog
Unofficial patch which corrects issues introduced and unfixed by the 1.07 patch. Includes the sound fix above, though still requires patch 1.07 to be applied first.

Thread & download link
Unofficial patch that adds support for the Gravis Ultrasound to Dune II. Note that there are two versions of this driver available, one for real machines and another for DOSBox. Select the correct version for your setup.

EMCPatch adds some game improvements: buildings no longer decay for no reason, carryalls always bring repaired units from the repair facility back where they picked them up (you no longer need to surround the repair facility with walls for this), and missile turrets get always out-ranged by rocket launchers (previously, they had to be positioned at certain angles to get out of turrets' range). It requires WWPak to install, a version for SuperDune (and derivatives) can be found here.
REP-HI-FIX adds missing animation frames to the repair facility and Hi-Tech factory. Like the fix above it requires WWPak to install. A separate version with a faster heavy factory "production ended" animation can be found here.
Dune2Retro is a mod of the unpatched version of the game that adds fixes for the glitches but keeps the original balancing and other gameplay features. Also includes SuperDune2 (See below in fangames for details).

More detailed lists of unfinished ports, as well as fan-made campaigns, can be found at: Dune II fangames, Custom maps and Dune II clones and remakes 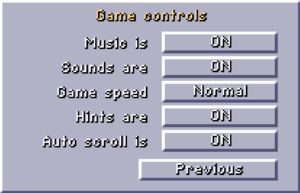 There are numerous bugs that remain in the game that haven't been addressed by any patches, official or unofficial. A good source list is available in this PDF. An experimental compilation of hex fixes are available here (sign in required to download document).

Although Dune can run on older versions of Windows (without restarting in MS-DOS mode), sound corruption usually occurs followed by an eventual crash. This is due to some of the sound files being damaged and causing memory leaks.