The Dead Island Helper utility can be used to fix many bugs and tweak advanced graphics settings.

All Windows and Linux versions require Steam DRM.
Following the release of Dead Island: Definitive Edition, the game has been pulled from most digital distribution platforms.

Steam and Mac App Store players cannot play together.[1]
The Game of the Year edition contains all DLC. 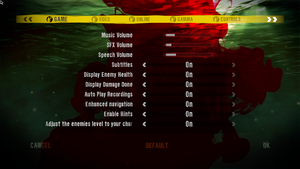 Utility to apply fixes and tweaks to the game.
Not compatible with Dead Island: Definitive Edition.[2]

Allows you to reset your skill points.
PS3/Xbox 360 save files can be converted to PC. 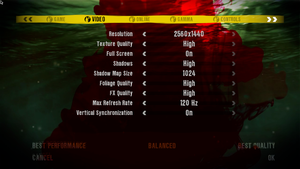 Changing your Field of View may cause issues when hip firing guns. 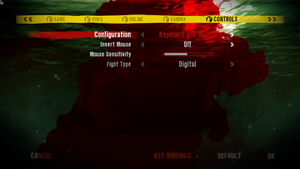 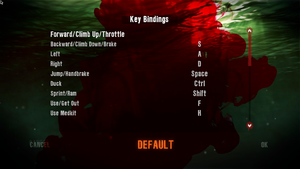 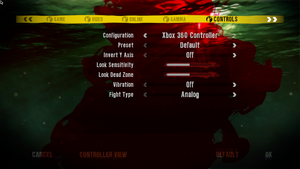 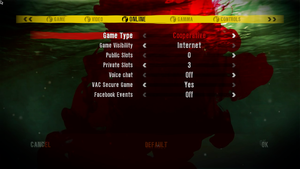 If you have installed mods or edited the .xml for characters, all clients need the same mods in order to play.
It should also be noted that challenges are global, so if you are close to killing for instance 1 million zombies with one characters, and you play co-op with another and hit one million total kills, this character will gain all the XP from completing the challenge
Steam and Mac App Store players cannot play together.[1]

You can find various fixes in the FAQ on the Steam Community Discussions page for Dead Island.
If you don't want to manually apply some of these tweaks check out tools section at end of the page.

This fix should no longer be needed with newer drivers.

Some users are experiencing ridiculously long load times when doing things like loading the menu, game, etc. It can literally take over 5–10 minutes for some people. Oddly enough, this may relate to error logging that is done by the game.

Co-op error message: "The game you have tried to join is no longer available"

Dead Island has a compatibility problem with 7.1 output devices, this includes Logitech USB headsets (G35, G930) and 7.1 sound devices that use 3.5 mm analog connections. This issue is typically immediately recognizable when reaching the title screen and hearing a loud, frightening, distorted noise; this issue also carries over into the gameplay. This issue was present in Dead Island: Riptide, but was corrected by Techland. Techland has yet to correct the issue with the first Dead Island game. The definitive solution is to set your device to anything below 7.1 but other options exist that may help.

Fullscreen mode only offers the option to use a refresh rate of 100 Hz or less, even if the screen refresh rate is set higher than that.

Black screen on startup or freezes on intro logo (Windows 8)

Game stutters and is capped at 60 FPS with Vsync off

Frame rate does not get capped with Vsync on

The PC port of Dead Island has aim assist. There is no way to disable this.[14]

After some time, the game can crash randomly. It can be somewhat mitigated by lowering some video settings, especially if you raised them above the minimum manually in Video.scr.