Japan controller variation was released as Controller S (codenamed "Akebono"[3]), which is smaller and lighter, designed for users with smaller hands. It was later released in other territories and by the end of 2003 had replaced the first-generation controller worldwide.

All Windows drivers requires Xbox USB adapter to connect gamepad to PC.
Windows 10 has no native drivers; drivers are needed. When the gamepad is plugged in for the first time, Windows 10 detects it as "Unknown device".

A new version of XBCD driver allows Original Xbox Controllers to be used on Windows machines.
Officially supports 32 Product IDs, although manual installation sometimes works for unrecognized deivces[4]. See list of supported devices.
Works with every adapter as DirectInput device.
XBCD Setup Utility tool allows rebind every button, assign pressure sensitive buttons to analog axes (or transform them into digital buttons), set dead-zones for sticks, set level of rumble intensity or thresholds when buttons can be activated.
Only 3 pressure sensitive axis are free to use. At least 2 buttons will be not remapped, and support of buttons remapped to the same axis will needs specialized software to make them supported.
Complicated installation. Requires disabling driver signature enforcement in Windows, as driver is not digitally signed.
Currently no support for wireless controllers.

Mayflash Tigergame Xbox joystick driver is the Alternative to XBCD. Allows to use analog sticks by changing "Controller mode" from "digital" to "analog".
Despite name, works with every adapter. Shows as DirectInput device.
The driver is digitally signed. Works as designed after finishing driver installation.
Allows switching "Controler mode" between Digital (analog stick works as d-pad), Analog (recognizing two analog sticks giving the closest experience to Xbox 360 gamepads), Flight (for steering wheels), DDR (for dancing pads - D-Pad directions can respond like buttons and you can also hold down opposite directions without the joystick canceling out on you).
Supports only pressure-sensitive axis, which can be assigned to two from 8 pressure-sensitive buttons (2 triggers or two from 8 pressure sensitive face buttons). Assigning two buttons as "analog", locking other buttons in "digital" mode.
Limited INF for automatic driver detection. Easily side-stepped by manually installing the driver[5].
No dead-zone adjustment. If joysticks are even slightly worn out character will be flying one direction or the other in a game-sensing digital joystick. Some developers are including dead-zone adjustment within their game. However, that is on a case-by-case basis. May require 3rd party application to apply dead-zones.
Button remapping is very limited within the tab. It does not allow the end-user to map direction as a button or to add additional buttons past 16.

Custom application Xb2XInput can translate the input from an Xbox OG controller over to a virtual XInput/DirectInput device for games to make use of, without needing any unsigned drivers to be installed. Officially recommended by xemu emulator [6].
To make use of Xb2XInput user requires installed the ViGEmBus driver.
Xb2XInput should support all the controllers that XBCD has support for, minus any steering wheels/DDR pads.
A list of supported controllers can be found at the top of XboxController.cpp file.
XInput devices do not recognize pressure sensitive buttons, so driver automatically dropping suppport for this gamepad's feature.
The dead-zone have to be set manually each time XB2X is ran. Authors plan add feature of storing user preference [7].
Works with every adapter as XInput device.
Xbox OG controller doesn't contain the guide button usually found on XInput devices. However as of Xb2XInput v1.3.2 this button can now be emulated, through the use of the LT+RT+LS+RS button combination. If desired user can easily disable it through the system tray menu.
Dead-zone adjustment on the fly. User can use the LT+RT+(LS/RS)+DPAD Up/Dn combinaiton for setting analog stick deadzone and (LT/RT)+LS+RS+DPAD Up/Dn for trigger deadzone adjustment. The dead-zone may be set individually on each controller.
Vibration toggle. In case user wish to disable controllers vibration function.

Use the 360Controller driver with Xbox USB adapter.

This controller is "Plug and Play" on most distributions of Linux, although requires Xbox USB adapter.
Xboxdrv is an alternative to the stock driver and allows many configuration options.

Can be recognized as Xbox 360 controller but after manual assignment. Controller cannot be found in Supported Controller Database, so Steam recognizes it as standard DirectInput device.
Do not support pressure-sensitive face buttons.

Works natively over USB Adapter.[8]
Needs remapping on Steam Link. Two shoulder buttons missing. Can be reassigned to ᴡʜɪᴛᴇ and ʙʟᴀᴄᴋ after manual reconfiguration.
Works without any drivers on any operating system that supports Steam.
Can be used just to send input from a controller to a PC. Go into Streaming options, hit 𝗬 and disable video and audio streaming.
Won't work great unless you connect it to LAN or a low latency Wi-Fi. 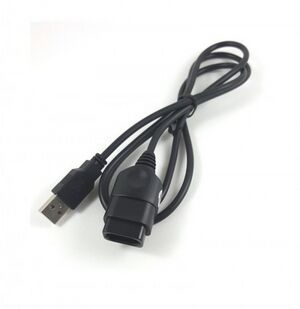 Using converter cable users are able to plug in and convert original Xbox Controller in your PC via USB port.

Depending on your platform, user may also need to install additional drivers. See more.

This cable is only compatible with for Xbox controller only, not for newer xbox generations controllers.
This is a converter cable only, before buying it's recommended to confirm if game controller can be supported by PC.
Cable Length: from 0.5m to 2.0m
Cheap price. Usually can be found with price under $10.
Plug & play, compatible with Windows XP / 2000 / ME / 98 and newer.
Simply connect to the USB port of your PC. No additional power source required.
Supports both analog and digital modes. All buttons on your XBox Controller are supported.
Support DirectX force feedback, DirectX 8.1 or higher.
Requires 3rd party drivers which are not delivered with adapter.

Games with generic DirectInput support are supported by the controller, however button placements may be out of place and need to be rebound. Refer to game-specific articles for rebinding support.
Controller has XInput layout which is supported by majority PC games. Usually ᴡʜɪᴛᴇ is emulating LB and ʙʟᴀᴄᴋ is emulating RB.
Unique layout with six face buttons makes controller comfortable for fighting games.

Total number of games: 2,274.
Please note, that this is only list for games that offer XInput button prompts.
XInput layout do not display ᴡʜɪᴛᴇ and ʙʟᴀᴄᴋ buttons.
Some may require use of Xbox 360 controller emulation. Refer to game-specific articles for details.