From PCGamingWiki, the wiki about fixing PC games
(Redirected from Controller:Steam Deck)

Steam Deck is a handheld gaming computer developed by Valve and Advanced Micro Devices (AMD), released on February 25, 2022. Steam Deck can be played as a handheld or connected to a monitor. It is an x86-64 device with integrated gaming inputs designed to play the full Steam library, including Windows PC games via the Linux-based Proton compatibility layer. Users can modify the device's software to run non-Steam applications and games from other sources. It uses SteamOS 3.0, but is also capable of running Windows 10 and 11. 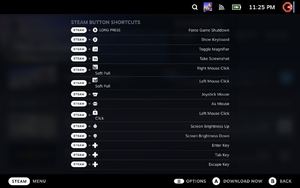 Games should be run in the default Gaming Mode wherever possible. This is because of a tweak to expose the CPU as 8 cores/8 threads instead of 4 cores/8 threads that are exposed in Desktop Mode. This lets several games pick 6 or 8 threads instead of 4, yielding big gains from SMT (Simultaneous Multithreading) scaling.[1] One can launch Steam in Desktop Mode, and then go to Library, Games and Add a non-Steam game to My Library - once this is done it'll be available in Gaming Mode under Library, Non-Steam Games.

The Steam Deck runs SteamOS, which allows games from one's Steam Library to be run. The compatibility of games depends on whether there is a native Linux version of a game, or whether the Windows version is compatible with the compatibility layer called Proton. You can also check the compatibility of games on Steam Deck by checking whether it contains a Steam Deck Verified check mark on the Steam Store page, or using the website ProtonDB. By default, games will launch the Linux version of a game, or if that is not available it will launch the Windows version through Proton. Games on third party launchers or individual games can be installed manually through the Desktop Mode. Below are several launchers which can be installed, and then added to Steam's 'Gaming Mode'.

Epic Games Store is not supported on SteamOS, but can be manually installed.

GOG Galaxy, the Windows client for GOG.com does not support Linux.

Microsoft Store and Xbox app versions of games are not currently playable on SteamOS, but can be played by installing Windows on to the Steam Deck. See the Steam Deck#Windows article for further instructions.

Steam Deck is a fully operational x86 PC, and operating systems like Windows can be installed and can be used as long as the correct hardware drivers are provided. Windows drivers were officially released by Valve on March 10, 2022.[12] and can be downloaded from Steam Deck - Windows Resources page, these include the GPU, Wi-Fi, Bluetooth, SD card reader and Audio drivers.

As of March 31st, 2022, Windows 11 (and 10) can be installed as fTPM support was enabled. Also, dual-booting SteamOS and another operating system is possible[13], but not yet officially supported and "will be released alongside SteamOS 3 once it's complete".[14]

The main advantage of using Windows as opposed to the built-in SteamOS 3 is the ability to run games that are incompatible with SteamOS 3. For example Destiny 2 explicitly does not support Steam Deck unless Windows is being run as the operating system.[15] Similarly PC Game Pass can only be played on Windows and not on SteamOS.

Steam Deck uses a MicroSD slot which is limited to UHS-I, with a read speed of 100MB/s. It is possible to install games and software onto the SD card. If you install games from third party launchers such as Epic Games Store or Heroic, then you will need to grant permissions for those applications to write to the SD card.

Steam Deck makes use of an internal storage drive in an uncommon 2230 size M.2 SSD. Popular models include the Western Digital SN530 and the Samsung PM991, there are not many other similar devices in the same size. There is a detailed SSD swap guide written by u/CyrexArtwork.

There are multiple ways to share files with other computers or operating systems, including setting up SteamOS to connect via SFTP/FTP.